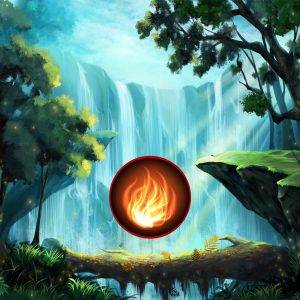 Fire. Water. Earth. Wind. In the Elemental Valley, every person has an iteration of one of the four parental elements. After hundreds of years, variations in the elements have arisen to the point where some pure elementals are rare. Nuria is the first fire elemental in generations. Frustrated by her inability to create fire, Nuria practices every day without fail. After three years, she’s ready to give up when a storyteller visits her village with a shocking revelation.

The Elemental Valley: Fire is the first part of a 4-part episodic story. It is currently available on Kindle Vella. To start reading, you can click here to be sent directly to the story or read the first episode below.

Red hot tendrils licked the air, dancing in all directions. Reaching toward the bright blue sky, they erupted, flickered, and then shrank to embers.

“Ah,” screamed Nuria in frustration, dropping her hands to her sides.

The breeze wafting through the trees seemed to laugh at her feeble attempts to create and mold the fiery flames into what she wished them to be. The chattering sounds of squirrels and other fauna in the forest added to her taunt. It was as if the whole world laughed at her failures. The infinitesimal flash of reddish light couldn’t even be called real fire, let alone her First Appearance.

“I’ll never learn to get this right.” Nuria’s black hair whipped around her face, causing strands of hair to stick to the corner of her mouth.

“Ugh,” she brushed her hair to the side and stomped down the path, trying once again to formulate flames.

Holding her hands opposite one another, fingers spread out, she concentrated as hard as she could. A single vein pulsed in her head as she focused even harder, willing the fire to spawn.

A spark formed but disappeared as quickly as it had appeared. The frustrating little spark ended its life almost as swiftly as it had begun.

The sunlight filtering through the trees intensified to a blinding level. Nuria shielded her reddish-amber eyes from the glaring light.

“Still trying to master fire, I see,” came a voice from beyond the bright light.

“Kiran,” still shielding her eyes, Nuria moved forward. “What are you doing out here?”

“Looking for you of course. You weren’t in the village and your mother is looking for you. The festival has already begun.”

Nuria rolled her eyes. “Can’t you put out that light? I can’t see anything!”

“Oh, right…I’m sorry.” The blinding light reduced to nothing but the natural sunlight once more. “There…is that any better?”

“Yes, of course, it is,” retorted Nuria.

As her eyes readjusted to the natural light of day, Kiran’s skinny form began to take shape. Disheveled blonde hair stuck out like a misshapen bird’s nest. Skinny saplings for legs and a narrow trunk to match approached her in purposeful steps. When Nuria’s eyes adjusted fully, she saw he wore his favorite pea-green tunic and brown trousers over his tattered shoes.

Plopping down onto a fallen log near Nuria, Kiran asked, “So, have you been practicing out here all day?”

Kiran tilted his head to the side and raised his right eyebrow.

“Okay, fine I have been.” Nuria dropped next to him on the log and held out her hands. “I just don’t get it. I’ve had my elemental powers for three years now and I’m still unable to control it.”

“Maybe you need to stop trying so hard and let it come naturally.”

Nuria glared at Kiran. “Naturally? I wasted almost an entire year waiting for this to come naturally. I can’t be as lucky as Maris and wake up one day perfectly able to create and control water.”

“Maris and you aren’t the same person.”

“You could fool most other people. Maris and I are twins, remember? Ever since we were born people have been treating us as if we were the same.”

Kiran laughed. “The two of you couldn’t be more different. Your black hair is nothing like Maris’ blonde hair with a faint tinge of blue. Not to mention that her eyes are as crystal clear blue as Agarian lake, while your eyes hold hints of the flame, but rest between an amber color and red. And your elements are different.”

“Our elements are complete opposites! She controls water while I am supposed to be able to control fire.” Nuria attempted to form fire again but to no avail. “But it just won’t work for me!”

“Nuria…why don’t you take a break for a while. Do something different. It’ll come in time.”

Shaking her head, Nuria countered. “All I’ve done is give it time! You don’t understand, Kiran. I’m the first fire elemental in generations. Not only that, but I come from a family of all water-based elementals. No one in my family even knows how this happened. How could a fire elemental be born into a family of water elementals? Everyone in your family has a variation of light-based element.”

“Yes, that’s true, but it has happened to other families.”

“But the opposite element?” Nuria’s reddish eyes focused on Kiran’s hazel ones. “It doesn’t even seem possible.”

“Hmm, I’ll have to think about it, but I’m sure there’s been someone with the opposite element born into a family.” Kiran leaned back on the log, tilting his head up in thought.

Flicking her hands to the side, Nuria tried once again to force the flames into existence. She channeled all her frustration and annoyance into her elemental power, pushing it through her veins and out of her hands. When nothing happened once again, Nuria released a puff of frustration and plopped onto the log next to Kiran.

Seeing her cross her arms tightly across her chest, Kiran decided to try to help. He knew Nuria would never stop practicing until she was ready to, no matter what he had to say about it. “Nuria, look. Watch how I create light.”

Without moving her head, Nuria watched sidelong as Kiran used his elemental power. With fingers slightly bent, he straightened them until his palm was flat, a shining light emitting from the center of his palm. As he slowly closed his hand back into a fist, the light diminished until it was gone entirely.

The ease at which Kiran created and extinguished the light stirred a knot of jealousy into the pit of Nuria’s stomach. She yearned to be able to effortlessly create fire in that way. To be the master of it. To control it with such ease that she could do it without even thinking about it.

“Slow and controlled motions. That is what it takes, Nuria.” Kiran rested his palm on her shoulder in comfort. “Try again. Just take a deep breath and channel all your energy into your hands. Feel it running through your body from your chest, through your arms, and out your fingertips.”

Nuria inhaled deeply, closed her eyes, and felt the elemental energy flow through her body. As her fingertips began to tingle, she reached out with both hands and let the energy flow. Opening her eyes, a grin spread across her face as the controlled flames before her glowed in the afternoon sun.

And that was when the forest burst into flames.